Posted in:
East Midlands business
Posted by: JasmineThompson
Posted on: 15/12/2021 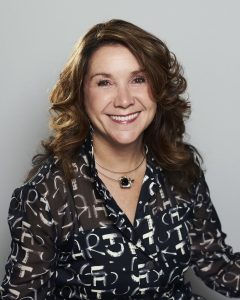 Lindsey Williams, who has headed up one of the region’s largest housing associations for almost two decades, is the new president of East Midlands Chamber.

The chief executive of Futures Housing Group, which manages more than 10,000 homes across Derbyshire, Nottinghamshire and Northamptonshire, was inducted into the role at the Chamber’s annual general meeting, held virtually today (Wednesday 15 December).

In her first speech as president, she spoke about her two priorities – to support the Chamber’s objective of strengthening links between businesses and communities to create a “Sustainable East Midlands”, and to support the wider region in attracting, developing and retaining great talent via the young professionals’ network Generation Next.

She said: “I’m extremely proud to become president of East Midlands Chamber after observing much of its great work across the region as a board member, and I’m excited about what we can achieve in the year ahead.

“I’m passionate about people having choice – something that is limited by poverty and a lack of opportunity – so I want to ensure our region has equity of investment compared to the rest of the country and, specifically, to promote how any company can have an impact on the local community.

“As a housing provider with an important role in our communities, I’m aware of the many benefits this can have for organisations – building reputation, raising employee loyalty and establishing networks – and there has probably never been a more important time for this connection as we continue to see the negative impact of the pandemic on communities.

“The Chamber’s aim is to help its members achieve their aspirations in supporting the communities in which they operate by getting 70% of our members active in local communities – so I hope I can support in increasing this number over the next year by sharing best practice and ideas, celebrating the work of members and providing encouragement to organisations to engage.”

Lindsey, who joined the housing sector via a management traineeship at Birmingham City Council before becoming one of the UK’s youngest housing association directors before the age of 30, has been chief executive of Futures Housing Group since 2003, when it was known as Amber Valley Housing.

She led it through the acquisition of Daventry and District Housing in 2007, as well as in buying a stake in Nottingham-based training provider Access Training – which helps more than 1,000 learners a year – and launching a grounds maintenance social enterprise Futures Greenscape, which last year merged into the wider group. 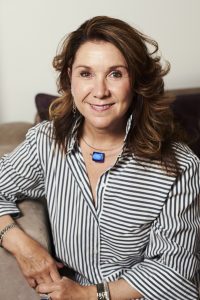 During her time at Futures, the organisation has doubled headcount to about 330 people, achieved Investors in People platinum accreditation and, earlier this year, moved from Ripley to a new 20,000 sq ft home called Futures House, based at Pegasus Business Park next to East Midlands Airport. Lindsey has also been a strategic leader on various boards and is an active member of the National Housing Federation in the region.

As well as inviting Chamber members to approach her to discuss how they can build links with their communities and encouraging them to put forward young leaders for Generation Next membership, she announced the three charities she will raise money for throughout 2022.

These are Treetops Hospice Care, an end-of-life care charity that operates in Derbyshire and Nottinghamshire; Focus, which helps young people in Leicester to develop skills, confidence and aspirations; and Nottinghamshire Wildlife Trust, which has helped protect the green spaces that have become so valuable during the pandemic.

Outgoing president and Generation Next ambassador Eileen Richards MBE, who owns Leicester-based ER Recruitment, presented her three charities – Chesterfield Samaritans, Help the Homeless Leicester and Nottinghamshire Hospice – with their equal share of the £12,000 she fundraised.

In her speech, she said: “I chose these three charities carefully to reflect the wide range of good work being done every day and I’m incredibly proud to have quadrupled the Chamber’s previous best amount thanks to the amazing generosity of our members and staff. 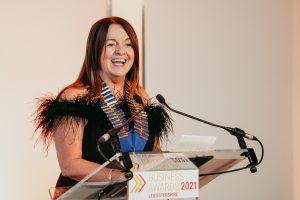 “I have thoroughly enjoyed my year as president and feel very honoured for the experience. It has been immensely fulfilling to see my priority objectives take great strides forward.

“Members have come to us in huge volumes and almost two-thirds have accessed at least one service; Generation Next has developed significantly to establish its own shadow board and stage its first awards event; and our strategy to help shape the region’s economic recovery has been witnessed by the Kickstart Scheme, in which we have helped to fill more than 1,500 placements.

“It was also exciting to see our Business Awards return to face-to-face events and encapsulate the best of all that our people and members do. Each of our three ceremonies highlighted the outstanding talent we are blessed with in our region.”

During the Chamber’s AGM, which was hosted by chair of the board of directors Ian Morgan OBE, Stuart Dawkins was elected as the new vice-president.

He brings a wide range experience, including heading strategic planning and corporate communications for a FTSE 100 company, and has been a bord member for organisations for a wide variety of sectors.

David Campbell, director of the Chamber’s Derbyshire Business of the Year, SureScreen Diagnostics, which has supplied Covid-19 lateral flow tests to the UK and overseas, gave a speech about his company and there was a presentation for longstanding members of the Chamber.